Developing a Saliva-based PCR Test Method: A Key to Preventing the Spread of Infection

Coronavirus is continuing its spread across the globe and healthcare workers have been experiencing unprecedented levels of workload and pressure since its outbreak. What saved the stressful frontline workers from the fear of coronavirus infection was an idea that came out of a word from one of Dr. Teshima’s colleagues.

Prof. Takanori Teshima of Hokkaido University has demonstrated the effectiveness of a saliva-based PCR test method. A reagent kit for detecting novel coronavirus, which was developed by Shimadzu, helped his challenging study in the initial phase. This article introduces the experiences of Prof. Teshima and his team in their efforts to develop a saliva-based PCR test method as well as his thoughts about what medical institutions, companies and citizens should bear in mind while living with this situation.

The earliest outbreak of COVID-19 in Japan occurred in Hokkaido, the largest and northernmost municipality in the country. After the first case was confirmed in Hokkaido on January 26, 2020, dozens of people tested positive on consecutive days in late February. On February 28, the Hokkaido government became increasingly alarmed and declared a state of emergency for the first time in Japan, calling on people to refrain from going out on weekends.

The declaration was initially effective as the number of new infections decreased. But that number rose again in April. By the middle of the month, more than 100 people had been treated at hospitals in Hokkaido, raising the possibility that the healthcare system might collapse.

Around that same time, a patient suspected of being infected with the coronavirus was brought to Hokkaido University Hospital. The patient had a fever and symptoms of pneumonia. Immediately, the hospital staff carried out a PCR test according to a prescribed procedure. The staff wiped the nasopharynx with a cotton-tipped instrument called a swab and collected sputum. Then, the samples from both specimens were prepared for PCR testing. But a little trouble in this process was reported.

"A staff member said, 'I thought I had taken sputum, but it was saliva. It failed.' But when the saliva samples were tested with a PCR machine, the result was positive while the samples from nasopharynx were negative. I wondered why," commented Dr. Takanori Teshima, who led the tests, when looking back on that episode. 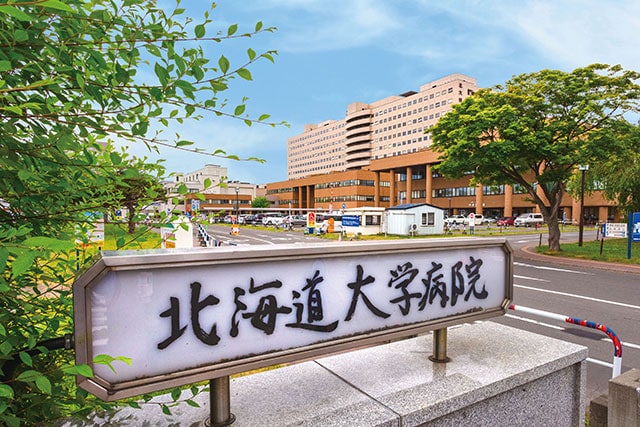 He immediately searched for references and found that SARS-CoV-2 is transmitted through the angiotensin-converting enzyme receptor (ACE2 receptor), which is involved in lowering blood pressure. ACE2 is also expressed in the oral cavity.

"That makes a lot of sense. Why are there so many dysgeusia (altered taste) in COVID-19 patients, and why do clusters occur in clubs with live music and karaoke rooms? Is it because the virus infects cells in one’s mouth? I formed a hypothesis that saliva could be used for PCR testing. And I was starting to expect that we might find a way to fight this disease."

At that time, the shortage of inspection capabilities was a serious problem in Japan. The shortage was related to both PCR testing equipment and the personnel needed to conduct the testing as cases increased. The swab-based sampling requires certain skills. Moreover, clinical laboratory technologists are at constant risk of infection because the patient may sneeze during sample collection. At the same time, the supply of face masks and protective clothing for medical staff was limited. Anxiety reached its limit for frontline healthcare workers. This situation also amplified public anxiety and threatened people's safety.

If saliva-based PCR tests became available, there would be no need to collect swabs. With this in mind, Dr. Teshima immediately took actions. His team collected both swab and saliva samples from the newly admitted patients. From April 25 to May, 10 PCR positive and 66 negative cases were tested for concordance of the testing results between swabs and saliva. The concordance rate was 97.4%. The PCR testing method using saliva was found to be as reliable as the conventional one using swabs.1

The Japan medical association immediately approached the government and the saliva-based PCR test was approved on June 2. This was unusually fast.

Saliva tests could be useful for screening asymptomatic people

The saliva-based PCR test has another advantage: it always enables getting fresh samples from a person’s mouth. People with a confirmed infection had to receive two consecutive negative PCR tests in order to be discharged from a hospital. At the time, there were many cases of individuals testing negative with saliva samples but positive with swabbing samples. This put a significant strain on hospitals that were dealing with a serious shortage of beds and wanted to discharge patients as soon as possible if they were found to be negative. However, the conflicting results, even for individuals who no longer displayed symptoms, made this impossible. As a result, the burden on medical institutions increased and the fatigue of healthcare workers began reaching its limit.

Dr. Teshima said: "We looked in references, which revealed that the nasopharynx contained fragments of “dead” virus. PCR tests cannot determine whether a virus is alive or dead while detecting the presence of genes of virus. Saliva, on the other hand, is always secreted in one’s mouth, and it washes the corpse of virus away. This is another benefit of using saliva as a test sample."

However, there was a deep-rooted distrust by many in the medical community who believed that "saliva samples are insensitive". The reason is that the number of viruses in saliva is small. In the long history of infectious disease testing, they said saliva-based testing could have led to inaccurate results, which is why swabs have been recommended.

Dr. Teshima confronted this popular theory head-on. He and his colleagues worked with airport quarantine and public health centers to conduct a large-scale survey of approximately 2,000 people, including those without symptoms of infection. This mass testing approach was unprecedented. The results showed that the sensitivity of the nasal swab test was 86%, while the saliva-based test was 92%. This result indicates that the saliva-based test was in no way inferior to the nasal swab test.2

As Prof. Teshima explained: "Our previous clinical study confirmed the effectiveness of testing in people with symptoms. At the same time, we believed that screening asymptomatic people would be the key to preventing the spread of infection. That’s why sensitivity is important. This mass testing approach was a huge step forward for it."

In fact, saliva-based PCR tests have become widely used for airport quarantine and screening at sporting events. Its simplicity is one of the reasons.

What PCR testing should be while living with coronavirus

One of the major concerns of Prof. Teshima as it relates to preventing the spread of infection is the very poor accessibility to PCR tests in Japan. The testing is allowed at limited healthcare facilities and only available to people showing symptoms of infection and to those in close contact with them. If asymptomatic persons or silent carriers without symptoms cannot be tested, they may unknowingly spread the infection. So, how can accessibility to PCR testing be improved?

Prof. Teshima said: "What I particularly focused on was that the testing samples could be self-collected. Saliva-based tests are also being implemented in the United States, but they use swabs. As a result, they still need healthcare technicians to conduct the test, which doesn’t solve the understaffed situation in medical institutions. If all we have to do is spit saliva into a container, put a lid on it and send it to a laboratory, we don't need technicians for collecting the sample."

Sneezing and coughing may occur during sampling, which causes a risk of infection for medical personnel. They need to wear protective clothing

It is safer and easier to obtain samples. Self-collection is also easy

Figure: Sampling method for the novel coronavirus test (Created based on this interview)

The spread of the COVID-19 infection tends to cause divisiveness, at times leading to violence and slander against others. Prof. Teshima warns of such trends and hopes that the improved accessibility to PCR testing will be the key to dispelling these concerns.

"First of all, keep in mind that everyone can be infected. It could happen to any of us. Therefore, if you test positive, people around you should be allowed to be tested immediately. It is important to establish such a social system," Said Prof. Teshima.

"It is important to shorten the time required for testing itself. The greater the number of tests per hour, the better the accessibility of the tests. I do expect enterprises’ efforts to establish reliable technologies and promote innovation in technology."

Tech companies and researchers should work to create a better society together. This is the vision that Professor Teshima envisions.

* Research Use Only. Not For Use in Diagnostic Procedures.
* The information including affiliates and titles of the persons in this article are current as of the time of interviewing (August 2020)

For Research Use Only. Not for use in diagnostic procedures.